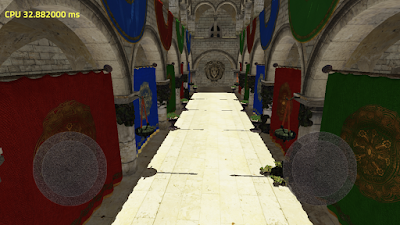 "When using DXR, we expect Hybrid Ray Traced Shadows to run on all hardware apart from the GeForce RTX with subpar performance"

I'm a bit confused by this statement. At the moment, Nvidia RTX/Volta is the only hardware that actually supports using DXR. Are you suggesting that the other vendors are going to release DXR implementations that are sub-optimal compared to what you have in Confetti?

Yep that is a bit confusing. As you say, DXR currently only runs on GeForce Volta/RTX. On everything else it is very slow.
I hinted towards the fact that even if you compare DXR on RTX GPU with our handwritten implementation, it should look favorable.
Don't take my word, download the source code and try it ... you can also try on many platforms :-)

Let me know how it goes.

Is by DXR performance it is meant the performance of Microsoft's (reference?) implementation? Or it's something else?