Screen-Space Ambient Occlusion (SSAO) is quite popular in the moment. ShaderX7 had several articles and there are lots of approaches to gradually improve the effect.
A good way to look at SSAO or any similar approach is to consider it part of a whole pipeline of effects that can share resources and extend the idea to include one diffuse (and specular) indirect bounce of light by re-using resources.
The overall issues with SSAO are:
1. quite expensive for the image quality improvement. Using the astonishing high amount of frame-time for other effects is an intriguing idea. In other words the performance / quality-improvement ratio is not very good compared to e.g. PostFX where a bunch of effects consumes a similar amount of time.
2. a typical problem is that lighting is ignored by SSAO. Using the classical SSAO implementation under varying illumination introduces objectionable artifacts because the ambient term is darkened equally (obviously you can apply SSAO to the diffuse and specular term like a shadow term ... but then it isn't ambient anymore). If you have a "global ambient" light term like skylights, SSAO will diminish the effect. It also leads to problems with dynamic shadows.

Overall I believe a fundamental shift to more generic method is necessary to solve those issues. This is one of the things I am looking into ... so expect an update at some point in the future.
Posted by Wolfgang Engel at 3:55 PM 21 comments:

MSAA on the PS3 with Deferred Lighting / Shading / Light Pre-Pass

The Killzone 2 team came up with an interesting way to use MSAA on the PS3. You can find it on page 39 of the following slides:

What they do is read both samples in the multisampled render target, do the lighting calculations for both of them and then average the result and write it into the multi-sampled (... I assume it has to be multi-sampled because the depth buffer is multisampled) accumulation buffer. That somehow decreases the effectiveness of MSAA because the pixel averages all samples regardless of whether they actually pass the depth-stencil test. The multisampled accumulation buffer may therefore contain different values per sample when it was supposed to contain a unique value representing the average of all sample. Then on the other side they might only store a value in one of the samples and resolve afterwards ... which would mean the pixel shader runs only once.
This is also called "on-the-fly resolves".

It is better to write into each sample a dedicated value by using the sampling mask but then you run in case of 2xMSAA your pixel shader 2x ... DirectX10.1+ has the ability to run the pixel shader per sample. That doesn't mean it fully runs per sample. The MSAA unit seems to replicate the color value accordingly. That's faster but not possible on the PS3. I can't remember if the XBOX 360 has the ability to run the pixel shader per-sample but this is possible. 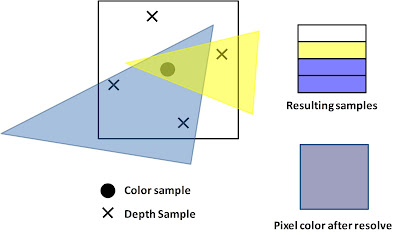 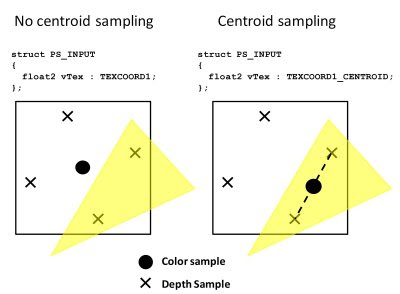 Posted by Wolfgang Engel at 7:04 AM 8 comments: